WHEELING — Looking around Wheeling Hospital, its inclusion into the West Virginia University Health System is obvious.

The “Flying WV,” the logo synonymous with WVU, can be found prominently and abundantly. Yet, Wheeling Hospital CEO Douglass Harrison said that the hospital joining the WVU team is much more than a cosmetic change. It’s a change that he feels will benefit Wheeling and the Ohio Valley immediately and well into the future.

“You’re joining a world-class academic health center and health system,” Harrison said. “As a part of that, WVU medicine will provide the resources necessary to make sure Wheeling Hospital is successful. If you look around our system, every hospital that we’ve brought in, if you look from day one and look through a three-year scope, you’ve seen growth.

“You’ve seen job growth, you’ve seen clinical growth at all of these hospitals and you’ve seen financial growth,” he continued. “And you see reinvestment back into the state of West Virginia.” 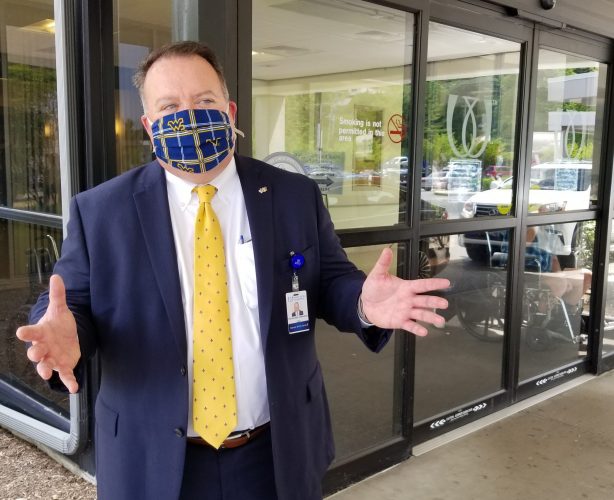 Years before either agreement was put to paper, Harrison said, WVU Health System had an interest in planting its old gold and blue flag in the Friendly City.

“We have had our eyes on Wheeling Hospital,” Harrison said. “I got there in 2015, (WVU Health Systems President and CEO) Albert Wright and I said we’ve got to be in the Wheeling market. We’ve got to get Wheeling Hospital, some way, somehow. This is the crown jewel of this market.”

Now that it is part of the system, Harrison said they’re working on ways to make that jewel sparkle even brighter. One way is in the service providers they’re recruiting to Wheeling Hospital. When Harrison arrived at the hospital in 2019, he appreciated the breadth of service it provided. He wanted to improve the depth.

Part of that was making the hospital’s physicians more specialized. In the past, some surgeons handled vascular, thoracic, cardiac and general surgeries all in the course of one day. Now, the hospital is bringing in surgeons who focus on one specialty in order to become an expert in the field.

Harrison also is looking for a hybrid-type of physician, one that can thrive in a community hospital environment, yet is also able to enjoy the benefits of being connected to an academic medical center.

What Harrison and the WVU Health System want from Wheeling Hospital is for it to grow into the tertiary hub of WVU Medicine. So if a patient needs a higher-end service, they first will go to Wheeling. If something more advanced is necessary, the patient then will go to Ruby Memorial Hospital in Morgantown, the main hub of WVU Medicine. When the need is treated, that patient’s follow-up care will come at a WVU Health System hospital closer to their homes, like Reynolds Memorial in Glen Dale, Wetzel County Hospital in New Martinsville or Barnesville Hospital in Ohio. 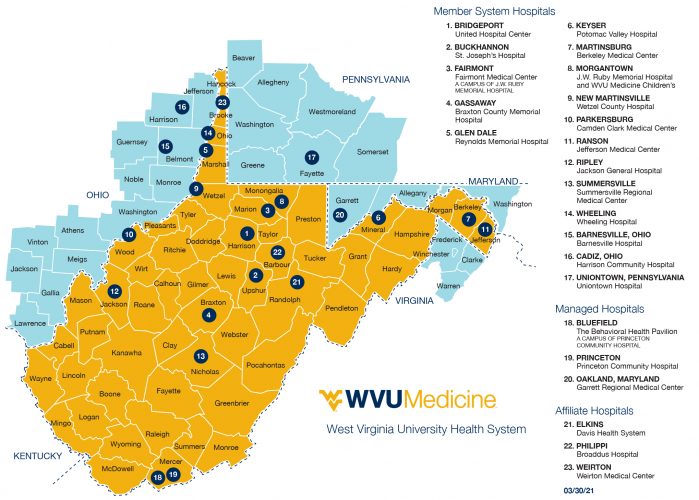 With Wheeling in the fold, Harrison said, the system wants to reduce the rate of sending patients outside the state’s borders for care, and allow West Virginians to take care of West Virginians.

The transition for Wheeling Hospital to WVU Medicine was not easy at the outset. When Harrison arrived, he inherited a Department of Justice investigation into accusations that Wheeling Hospital violated the federal False Claims Act by allegedly paying millions in kickbacks to doctors. The hospital ended up paying a $50 million fine. Because of that, it didn’t receive the $43 million it was eligible for in the first round of CARES Act funding.

A nearly nine-figure effect stung, Harrison said, but it could have been worse. What helped was the hospital’s ability to show the DOJ the important role the hospital played in the community.

“In order to clean that up and not have a crippling financial impact on the institution, immediately we start working with the government about what Wheeling Hospital means to this community, what it means to this area,” he said, “that if you were to have a crippling effect on this hospital, it would essentially either, A, close it down or we would have to start stripping out services, which would require people to travel long distances for care.

“I think (the DOJ was) willing to say, ‘OK, we understand the hospital’s position within the community and what it means,’” Harrison added.

Now that the agreement is official and Wheeling Hospital is totally in the fold, Harrison’s mission is to keep showing everyone that the hospital remains an integral part of the community, one that residents want to use for their healthcare needs.

“We will make sure we invest in platforms to keep you healthy and to make sure that if you do need clinical based care, whether it’s on the outpatient side, the wellness side, if it’s acute care, we’ve got you covered and this is the health system you need to be in.”