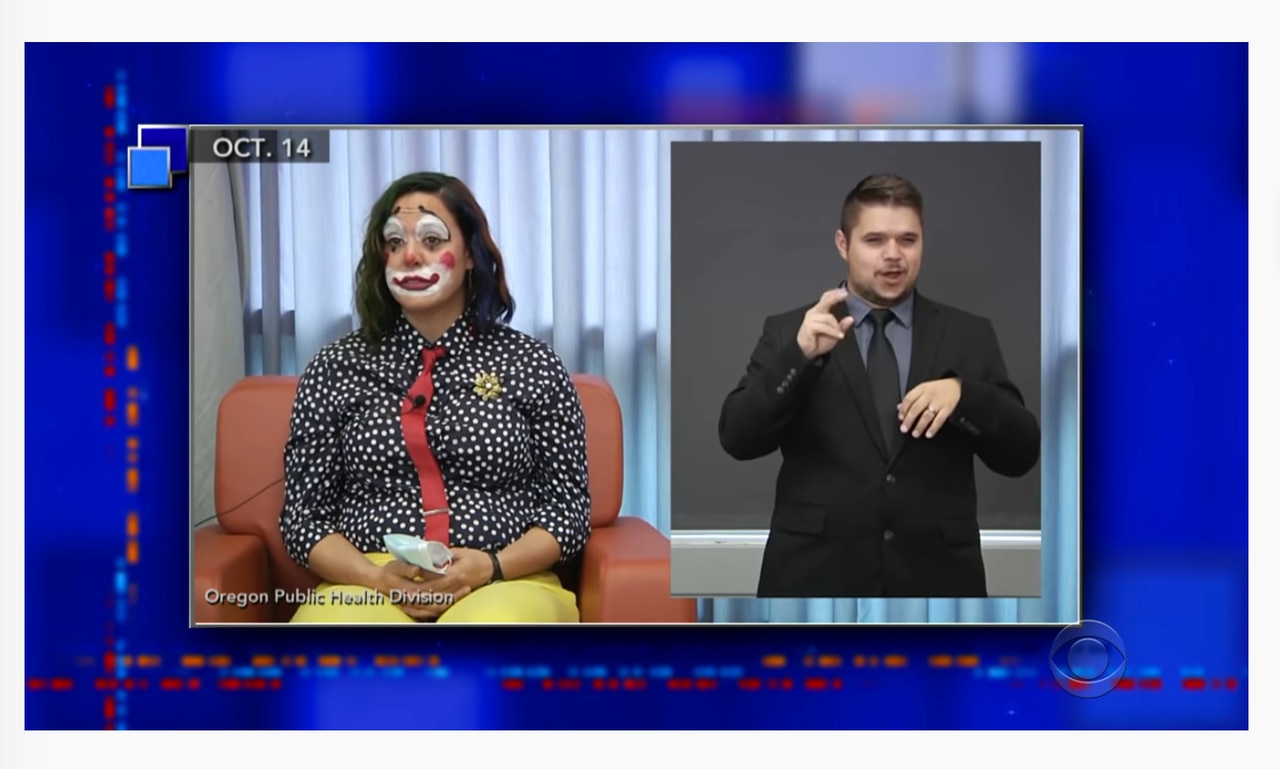 An Oregon Health Authority video that seemed like a tone-deaf blend of Halloween festivity and grim coronavirus news has recently been getting less-than-flattering attention in national media. On his Friday show, “The Late Show” host Stephen Colbert joined the fray.

During his monologue, Colbert talked about the distressing surge in coronavirus cases in the U.S., in a segment called “Catch a Third Wave: Endless Bummer.” After going over some of the disturbing rise in COVID-19 case counts, Colbert added, “It’s pretty depressing.”

Then Colbert mentioned an Oregon Health Authority video, in which one doctor, as Colbert said, “celebrated Halloween by putting a happy face on the pandemic.”

The show then cut to a segment of a video from Oct. 14, in which an official, who’s wearing Halloween-style clown makeup, soberly recites statistics: “As of today, there have been 38,160 cases of COVID-19 in Oregon, with 390 new cases being reported today. Sadly, we are also reporting three deaths today, bringing the statewide total for COVID-19 related deaths to 608.”

(Note: Colbert discusses the Oregon Health Authority video at about the 6:07 mark in his monologue.)

Halloween may be a playfully ghoulish holiday, but the awkward mix of funny costume and deadly serious news in the Oregon Health Authority video prompted a comparison with the nightmarish character from Stephen King’s novel “It.”

As The Oregonian/OregonLive has reported, the video has already been covered by Fox News, The Independent, TMZ and others. An Oregonian/OregonLive video producer and editor, Samantha Swindler, helped the video gain viral traction when she took to Twitter to post a screenshot from the video, and asked: “I’m sorry but who at the Oregon Health Authority thought this was a good idea?”

Swindler’s post on Twitter was retweeted thousands of times. An Oregonian/OregonLive story following up on the fracas added that the clown-makeup-wearing bearer of bad news is Dr. Claire Poché, a public health physician with the Oregon Health Authority.

In a statement, Robb Cowie, communications director for the Oregon Health Authority, expressed remorse for the juxtaposition of clown costume and death toll announcement.

“We regret that, earlier this month, three tragic COVID-19 deaths were announced during a Facebook Live event focused on preventing the spread of COVID-19 during Halloween celebrations,” Cowie said.

“We mourn every person who has died from COVID-19 and we acknowledge the pain and loss their passing has left in the lives of their loved ones,” Cowie added. “We’ll continue to do everything we can to warn Oregonians about the risks of COVID-19 and the steps they can take to protect themselves and the people around them.”