MILWAUKEE – Even Santa himself is impacted by the COVID-19 pandemic.

But as a man who beats the odds every year by racing around the world in just a single night, the Jolly Old Elf has learned how to work around obstacles.

With that in mind, Santa – joined by Mrs. Claus (aka Dan and Bobbie Johnson) – kept the medical safety of his adorning young fans at the top of his list here Dec. 12 by greeting children at the edge of the road while the youngsters were seated inside their parent’s vehicle.

And to see those little faces light up upon seeing a man and woman dressed in red and white was the best gift of all for the Johnsons. 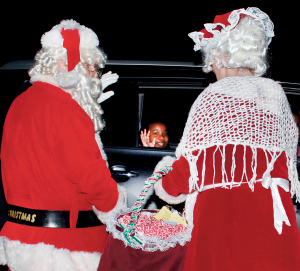 Santa and Mrs. Claus bid farewell to a youngster who had stopped for a quick visit as part of the drive-thru event. Staff Photo by Cal Bryant

“This is our 10th year doing this, and without a doubt this has been the most unique one, the most challenging one of them all,” said Dan, dressed in full Santa gear, standing in the back yard of his home along Doolittle Mill Road just prior to the drive-thru event. “But we’re not complaining about having to follow all the safety advice with COVID. Bobbie and I feel blessed to be able to continue to do this and put smiles on the children’s faces. That’s what it’s all about.”

Mr. Johnson said he knew months ago that the pandemic would limit the opportunities they had to serve as Santa’s helpers this year. He and his wife typically appear as the featured guests in several local parades. They also make visits, as Santa and Mrs. Claus, at other venues leading up to the Christmas holiday.

“We really missed going to the parades and other events,” he said. “Our granddaughters help us at those events by dressing as elves and they miss it as well this year.

“And then there’s the one-on-one visits with the children when they sit in your lap and tell Santa what they want for Christmas,” Johnson continued. “That’s the thing I miss the most, but it’s all about making sure they’re safe and I’m safe as well. That’s how life is at times, you just learn to adapt and roll with the punches.

“Some people are scared to get out and mingle with others right now, especially strangers,” he stressed. “We came up with the idea of greeting the kids while they are at a safe distance from us while inside their cars.”

Facing health issues of his own, Johnson said he entered “Santa season” with a bit of hesitation and worry.

“I was even halfway scared of doing it this year with all that’s going on with COVID and my own health condition,” Johnson noted. “Bobbie and I talked about it and decided it was the right thing to do. We don’t know what’s going to happen with this virus; the way the world is going right now this might be last year we get to celebrate Christmas.”

If that does happen, the Johnsons are going out in style by adding to their already huge display of holiday lights and Christmas-themed inflatables.

“We’ve almost doubled the amount of lights on our house and in our yard,” Johnson said, adding there are now 71,000 lights, up from 40,000 just a few years ago. “Even my neighbor let me use a little of his property to expand our decorations. If the good Lord is willing, we’ll add to it again next year.

“We didn’t realize just how popular our display of lights has become over the years,” he added. “It’s worth all the work. We enjoy seeing the people slow down and drive by. We enjoy being out in the yard and hearing all the comments and seeing the kids faces light up.”

The curbside Santa visit on Dec. 12 included Mrs. Claus handing out candy canes to the young, and the young at heart. As an added treat this year, Bobbi came up with the idea of letting Santa give each child a magic key. 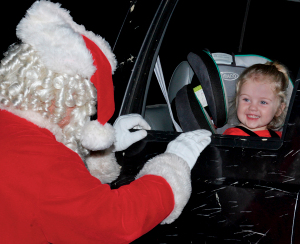 A local youngster shares her Christmas “wish list” with Santa from a safe distance while seated in her parents’ vehicle. Staff Photo by Cal Bryant

“The children are instructed to hang the key outside by their door and Santa uses his magic power to enlarge the key to a normal size that fits the door lock to let him enter,” she said. “After Santa finishes placing all the toys, he’ll hang the key on the Christmas tree so the child can find it on Christmas morning. It’s all part of Santa’s magical powers.”

For Mr. Johnson, his role as the local “Santa” began when Bobbi, who works as a nurse at the Rural Health Group in Jackson, became aware of a situation several years ago that involved another local man who also portrayed St. Nick.

“That gentleman had a medical condition that prevented him from attending a function in Roanoke Rapids where he would dress-up as Santa and greet children,” Bobbi recalled. “Dan had done that once or twice many years ago, so I volunteered him to replace the other Santa at that event. We even went as far as to gain the blessing of the other man before Dan filled his role.”

“Yep, she got me started in this [dressing as Santa] and now I look forward to it every year. We are so looking forward to tonight. We promoted it on social media and are hoping for a good turnout,” Dan concluded.

Based on the number of vehicles stopping in front of the Johnson home between 6 and 8 pm on Dec. 12, Santa’s “wish” was granted.

Cal Bryant, a 40-year veteran of the newspaper industry, serves as the Editor at Roanoke-Chowan Publications, publishers of the Roanoke-Chowan News-Herald, Gates County Index, and Front Porch Living magazine.

How to eat a more healthy, varied and balanced diet

Mon Dec 21 , 2020
A healthy diet can help reduce risks related to being overweight or obesity – such as some cancers, cardiovascular disease and diabetes. It can be hard to define what we mean by a healthy, balanced and varied diet. Research has found that when people try to follow dietary guidance and […] 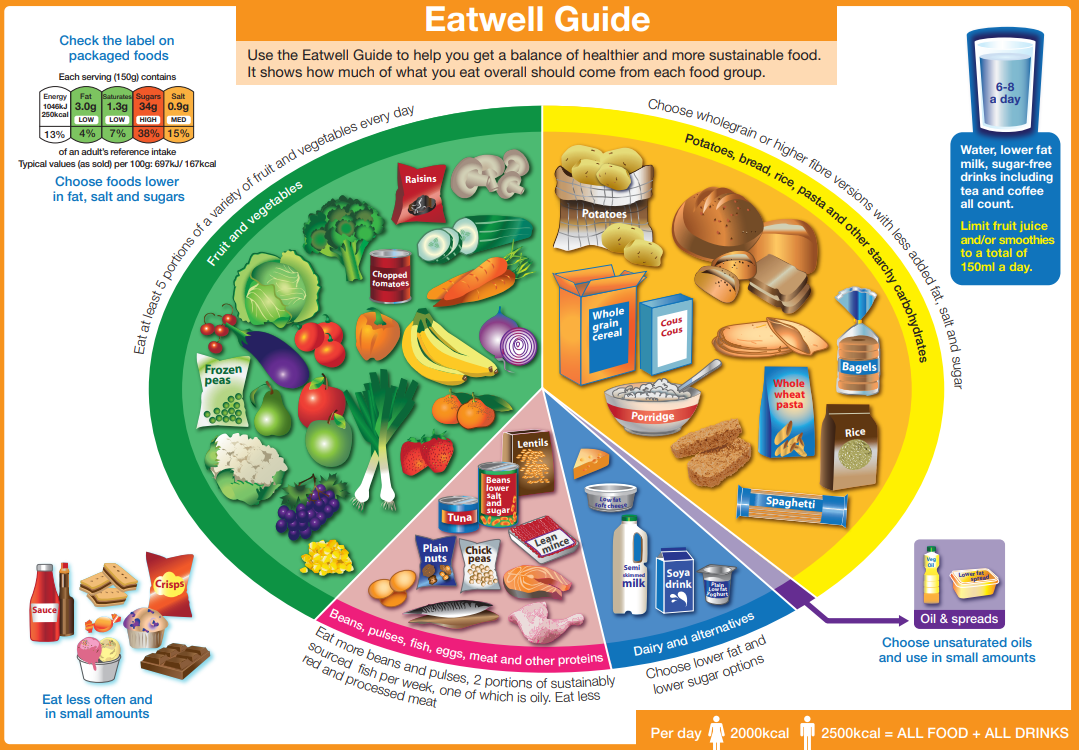