And there were already reasons to doubt. Since the pandemic hit, the government has failed multiple times at handling the crisis and building public confidence. Early on, the shortage of masks was purposely hidden, as state representatives lied about masks’ usefulness to justify the fact that they were not able to provide a sufficient number to protect the population.

The crisis also exposed the lack of equipment in hospitals — not only in terms of ventilators, but also the most basic supplies. Health-care workers were sometimes forced to compensate by using swim goggles or garbage bags instead of gowns.

It was a shock for citizens to discover that France — the world’s seventh largest economy, widely praised for its remarkable health system — could end up struggling to cover the basic needs of its hospitals. But was it a total surprise? Not really.

Since 2018, France’s largest and longest social movement for decades has been agitating. The Yellow Vest demonstrators took to the streets and the roundabouts for months to express their anger against President Emmanuel Macron, whose policies, they said, favored the richest fringes of the population while abandoning workers who did not earn enough to cover their necessities. One of the movement’s loudest voices was Ingrid Levavaseur, a single mother and nurse assistant whose wages were not enough to live on.

When the pandemic hit, the government had to shift course and allocate more money to the health sector. It signed the “Ségur Agreements,” which granted nearly $10 billion (8.1 billion euros) to hospital staff. But it was not enough, according to several unions who went on strike again to remind the government of their pre-pandemic demands and protest the shortage of beds. According to the Sud Union, 8,000 beds were lost in two years.

Under Macron, more than $3 billion (2.6 billion euros) has been cut from public hospitals in 2018 and 2019 — far more than under his predecessor. And it took the pandemic to ensure there were no further cuts to this vital infrastructure. Even now, a $1 billion (900 million euro) cut is planned by the Social Security financing bill for 2021, which diminishes the effect of the Ségur Agreement. So when he visited a health facility in October, Macron faced banners of infuriated medical staff asking for “money for the public hospital.”

In his address announcing the first lockdown in March 2020, the president praised the virtues of the welfare state, calling free health-care “a valuable asset” and adding that some “goods and services should be placed outside of the market forces.” That was a surprising turnaround from a politician who claimed he intended to govern a “start-up nation” and thereby support a neoliberal agenda. Medical staffers did not miss the opportunity to point out “a discrepancy between the words and the actions.”

But this problem has been worsened by multiple governments over the years. For the past two decades, French public services have been damaged by austerity rules pushed by E.U. policies. According to Martin Schirdewan, a member of the European Parliament, the European Commission recommended 63 times between 2011 and 2018 that E.U. states privatize some parts of the health sector or reduce the public expenditures on health. Economist Thomas Porcher estimates that 70,000 beds have been cut in France over the past 15 years.

The major health crisis has exposed the serious damages caused by the neoliberal turn implemented in France. At a moment when effective public services are needed more than ever before, austerity is a threat not only to the social stability but also the well-being of the population. France used to be a model for the world — it was even used as an example in Michael Moore’s documentary “Sicko.” Our health-care system has to remain a common good instead of being at the whims of economic interests.

Sun Jan 31 , 2021
Posted on 1/25/2021 Morgantown, W.Va., January 25, 2021 – Citing the urgent need to vaccinate as many West Virginians against the SARS-CoV-2 virus as soon as possible, the elected leadership of Monongalia County, the Monongalia Health Department (MCHD), Mon Health System, and WVU Medicine announced today (Jan. 25) that they are […] 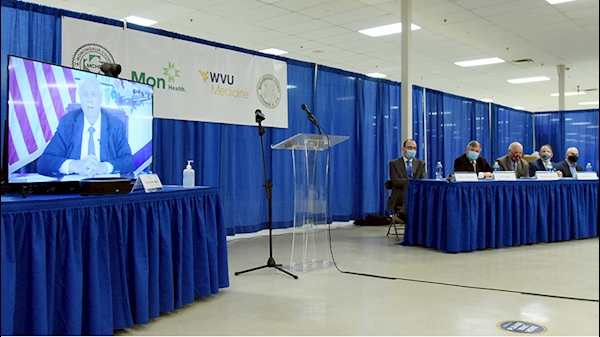