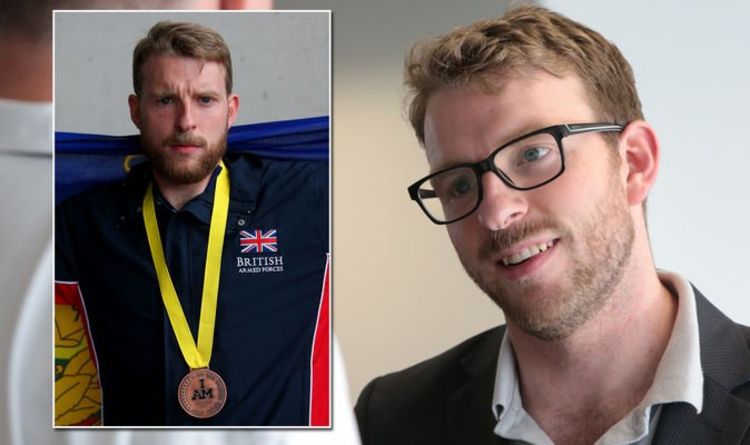 JJ Chalmers, 33, is in the latest line-up for Strictly Come Dancing, and fans were touched by his first performance last week as he danced the waltz with partner Amy Dowden. But the viewers of the show may be unaware of the hardship the former Royal Marine has undergone in the past, for in 2011 he was seriously injured by an Improvised Explosive Device.

Chalmers was deployed to Afghanistan on foot patrol in Helmand province that year, and as a result of the explosion he suffered a slew of terrifying injuries, including a crushed eye socket and burst ear drums.

The blast also completely destroyed his elbow, blew holes in his legs and left him with two fingers missing on one of his hands.

He recalled being in more pain than he had ever experienced before, speaking to Stark Talk.

“I remember being on my back in more pain than I’ve ever experienced”, he said.

“Both my arms had more or less come off. My right arm just wasn’t there at the time, my left hand had lost all of its fingers. The next thing I remember is just feeling completely helpless.”

Chalmers was rushed to Camp Bastion where he was put in a coma before being flown back to the UK.

While he was in the induced coma, medics worked to piece together his elbow and to rebuild the physical structure of his body.

“Most of my torso is missing,” he continued.

“It looks like I’ve been bitten by a shark! But that’s because those nice pieces of fleshy skin now live on my elbow.”

Chalmers woke up a week after the blast. But more than 30 groundbreaking surgeries were to follow, and he was forced to re-learn how to walk and dress himself.

The now TV presenter and Invictus Games medalist credits his girlfriend, Kornelia Chitursko, for supporting him during his rehabilitation.

He added: “In the earliest part of my recovery I didn’t think I’d walk again, never mind dance!”

When asked by The Scotsman whether there are any similarities between the military and Strictly, he answered: “The mindset. You have to embrace the culture and everything that comes with that.

“Within the military that gives you resilience and adaptability and those skills transfer to most things in life, but it’s something which is not just a physical but a mental challenge as well and I’m finding this a really big mental challenge.

“It’s a huge adjustment and a lot to think about and I like to think I’m taking it all in my stride just as I would when you throw me into the unknown in the military essentially.”

Your Easter egg stash could be your ticket to good health