“They said I was crazy,” said Murawski, a nurse manager here at the Temple University Health System. “But I’ve been educating them,” she said, explaining how illnesses such as mumps have been all but conquered by vaccines, only to make a comeback as immunization rates dropped.

With this new vaccine, Murawski said, “We’ll be the examples.”

By signing up for one of the early shots, Murawski has joined a growing group of housekeepers, food-service workers, respiratory therapists, trauma surgeons and others whose experience receiving the coronavirus vaccine could shape the attitudes of family members, friends and neighbors for months to come.

For all the symbolic importance of the applause, hugs and tears of relief that erupted nationwide after the first vaccine doses were administered, what happens next, out of the spotlight, will be key to the United States’ attempts to achieve herd immunity by immunizing 70 percent of the population.

“There’s a lot riding on the buy-in of the public,” said Lauren Sauer, the director of operations at the Johns Hopkins Office of Critical Event Preparedness and Response, who said health-care workers may not be prepared for the influential role they will play.

Many health-care workers leaped at the opportunity to get the vaccine, confident in science they understand. Others have expressed more caution. And among the men and women offered shots will be some who turn them down because of personal medical concerns that they may now feel under pressure to share.

“We have to give them the tools to talk and the space to draw lines,” Sauer said.

National statistics suggest that reaching 70 percent acceptance will be challenging. Gallup found that willingness to take a vaccine decreased from 61 percent in August to 50 percent in September before rising to 63 percent by late November. While experts suggest that hardcore vaccine skeptics may account for only between 1 or 2 percent of the population, their social media reach is far wider. And with a new technology like the Pfizer-BioNTech mRNA vaccine administered last week, large numbers of people, including many health-care workers, are taking a wait-and-see approach.

A December Kaiser Family Foundation survey of people who work in a health-care delivery setting found that 29 percent of them said they probably would not or definitely would not get a coronavirus vaccine, even if it were available free and had been deemed safe.

At Temple, a little less than a week after 3,000 invitations were sent to front-line health-care workers, about 50 percent had signed up to receive shots — and the numbers were growing as the vaccinations took place.

Gerard Criner, the chair of thoracic medicine and surgery and director of the Temple Lung Center, said there is no hesitancy among those treating patients gravely ill and dying of covid-19.

“This is going to pay off, three or six months from now,” he said after he was given the shot and returned to the grueling work he has done every day for the nine months of the U.S. pandemic.

Across the country, the vaccine pioneers noted the unfamiliar new roles they were playing as both recipients of and advocates for the new vaccine.

“It’s a weird position to be in, because, ultimately, what people do is not my responsibility,” said Christy Mulder, a registered nurse in the medical intensive care unit at the University of Utah Hospital.

“My responsibility is not to make people do something they’re not comfortable doing,” she said. “What I’d tell people is: ‘Look at the facts. Look at the study. And weigh those risks and benefits.’ ”

Mulder referred to her own vaccination as “an honor” as she represents health-care workers around the country who want to protect themselves and the community.

“I see people who are dying, who are on ventilators, and they need everything to keep them alive. When you see that, it’s hard to understand why anyone wouldn’t get the vaccine, especially when it has been studied and deemed safe,” she said. “I wanted to get this vaccine because I want this pandemic to be over, and this is a huge step in that.”

Tony S. Reed, the chief medical officer at Temple University Health System, said his work as a primary care physician taught him to respect both the power of public health science and the importance of individuals’ opinions.

“It’s a fine line,” he said, navigating between providing information and appearing coercive.

Even before this week’s rollout, the hospital had been fielding phone calls from the community, Reed said, asking when the vaccine would be more widely available.

For now, vaccine supplies are severely limited, with new uncertainties arising even as hospitals are starting registrations for vaccination clinics. On Wednesday, Temple Health, which has 10,000 employees on five campuses, received 1,950 of the 13,650 doses allocated to Philadelphia County in the first week. Those doses were distributed to large and small hospitals citywide; 87 more hospitals across Pennsylvania were to receive 97,500 doses.

In coming weeks, as supplies increase, Reed said he hopes demand will heighten, too.

Shortly before the vaccinations began, he pulled out a pen and drew a simple bell curve on a whiteboard in a conference room. On the front end were “leaders” — the men and women here and thousands more around the nation who signed up for early shots. The bulk of the curve was made up of “followers” who take their cue from those leaders. The area where the curve drops off he labeled “laggards.”

What is referred to as an “adoption curve” has become a standard means of showing how new technologies — including iPhones and mRNA vaccines — spread through a population.

“Diffusion of innovation is a social process,” said Shantanu Nundy, a primary care physician and the chief medical officer of Accolade, a health and wellness company that partners with Temple to provide advocacy services to employees.

Leaders, or “early adopters,” who follow the science and choose the new technology as soon as it’s available, may be small in number, but their influence is far bigger as they pass information on to “followers.”

At Temple, the arrival Wednesday morning of a white box packed with dry ice brought waves of anticipatory relief. Amir Emamifar, the chief pharmacy officer, had been tracking the delivery as it made its way from Prizer’s plant in Kalamazoo, Mich., to the main North Broad Street campus, where it was divided, with some purple-topped vials sent on, under police escort, to two other vaccine administration sites.

“It’s a light at the end of the tunnel,” Emamifar said, his face reddening and tears welling up as he escorted the batch of 250 vials from the pharmacy to the auditorium for the first day of vaccinations. Employees soon began lining up to take the shots and, minutes later, to share their experiences in texts, phone calls and conversations with colleagues in the hospital’s corridors.

If all goes well, those conversations will continue outside the hospital’s four walls with trusted community leaders such as pastors in the surrounding neighborhoods of North Philadelphia.

Whitney Cabey, an emergency room doctor and specialist in urban bioethics and behavioral health, was among the first to receive a shot. She sat in the auditorium afterward describing the need to identify people who can “translate the language of science into everyday language.”

That, said Cabey, who is Black, is all the more important in African American communities, where there is a powerful tradition of oral communication and where distrust of public health is deeply rooted in “lived experience.” There is hesitancy, she said, even within her own family.

Michael A. Young, who became CEO of the Temple Health System in February shortly before the pandemic took off, says the hospital will continue to play a key role vaccinating Philadelphia’s residents in partnership with the city health department.

“We are the public health for 1.1 million,” he said, recalling a polio program in his native Lancaster, Pa., when tens of thousands of children received free vaccinations.

The notion that the people who take the vaccine — its consumers — will take over the process of marketing it is a familiar business strategy, often evaluated with a simple question: “Would you recommend this product to your friend?”

In the competitive world of medical care, some hospitals have begun employing “net promoter scores” to assess customer satisfaction. In a mass vaccination campaign, where funding for communications is limited, creating customer loyalty that extends to friends and neighbors may be even more important.

Many of the health-care workers who were vaccinated this week have been surprised to find out how many people wanted to learn about their experiences.

Mulder, in Utah, said her phone rang constantly in the 24 hours after she received her shot.

“People I haven’t spoken to since junior high or elementary school have reached out. It’s like, ‘I didn’t remember you existed!’ ” she said. “It’s been pretty wild.”

Among the many messages Murawski received was one from her daughter. “Proud of you,” it said.

And Ingrid Rivas, who coordinates the transportation of patients between Temple Health’s five campuses, said she has been bombarded with texts, phone calls and emails since getting the vaccine.

Rivas said that before getting the shot, she was anxious. But since then, she has been able to reassure people in Spanish as well as English, including her parents and their friends, partly because she understands their worries.

At least one colleague has signed up for the vaccine this weekend after hearing about Rivas’s experience.

“I convinced her to get it,” Rivas said. “I told her I feel great. It’s no different than the flu vaccine.”

Andrew Becker in Salt Lake City contributed to this report.

Alyssa Milano, speak up and show passion and leadership ability

Thu Dec 24 , 2020
CELEBRITIES BORN ON THIS DAY: Marla Sokoloff, 40; Jake Gyllenhaal, 40; Alyssa Milano, 48; Tyson Beckford, 50. Actor Jake Gyllenhaal (AP Photo/Steven Senne)  Happy Birthday: Use whatever leverage you can drum up this year and turn something you enjoy doing into a financial gain. Be creative, and take the initiative […] 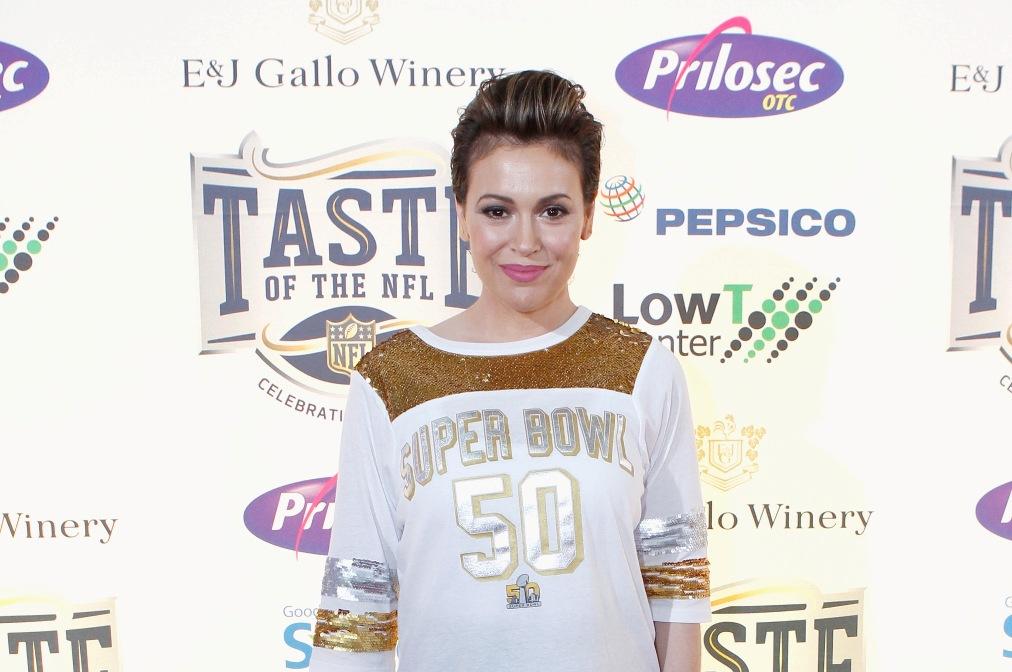