One of the many keys to saving forests and slowing climate change might prove to be healthcare. Illegal logging in Indonesia’s Gunung Palung National Park has declined over the past decade, and a recent study shows that that decline stemmed from better access to healthcare.

By meeting the needs of local communities, an intervention program improved the health of both the Gunung Palung forest and the people in nearby villages. A recent evaluation of the program found that by providing affordable healthcare and training in organic farming, the intervention allowed communities to stop logging and protect their forest.

When Gunung Palung National Park was first established as a protected area, local residents continued to venture into the forest for logging. Illegal logging and other types of deforestation threaten the biodiversity of rainforests, chipping away at habitats, important sources of medicine, and oxygen stores. The rainforests also contain vast stores of carbon, and deforestation can release harmful amounts of carbon dioxide into the atmosphere.

To figure out why illegal logging persisted, a team from Health in Harmony and Alam Sehat Lestari (ASRI), the organizations behind the intervention program, spent hundreds of hours speaking with hundreds of people from local communities. Community members shared that they wanted to protect the forest, but their circumstances left them little choice but to log.

“In every community, the consensus was the same,” said Kinari Webb, co-founder of ASRI and founder of the international partner organization, Health in Harmony. They needed training in organic farming and access to high quality, affordable healthcare. “They said without that, we can’t stop logging. If our family members are sick, we don’t have a choice.”

The rural villages surrounding Gunung Palung were far from affordable, quality healthcare, and saving cash for medical emergencies wasn’t doable for families in these low-resourced communities. “One of the only ways for people to get cash quickly was to log the forest, even though they knew the forest was critical to their own wellbeing,” said Webb.

The Health in Harmony and ASRI teams came to an agreement with 21 districts surrounding Gunung Palung. ASRI would work to give the communities what they need, providing a healthcare clinic and other programs the community had requested, like organic farming training and conservation education. They would also ensure that healthcare could be affordable for everyone. When it came to medical costs, patients wouldn’t need to pay with cash. The clinic would accept manure, seedlings, labor, handicrafts or other goods as payment too. If the districts could reduce logging, those residents would also get discounts at the clinic.

“What this program is trying to do is to understand the community needs and the community relationship with protected areas,” said Isabel Jones, post-doctoral scholar at the University of California, Berkeley School of Public Health.

During its first decade of operation, between 2008 and 2018, the clinic served nearly 30,000 different patients over 80,000 visits. Apart from healthcare, “we did regenerative agriculture training, we gave goats to widows, and we provided education for children. It was a huge amount that we did,” said Webb. “And in return, these communities avoided carbon loss.”

Jones, lead author on the study evaluating the intervention, Webb and their colleagues looked back on the first ten years of the clinic and program operations to see what kind of impact the intervention actually had.

They analyzed satellite data of forest coverage in Gunung Palung over the years and compared that to Indonesia’s other national parks. “We found a 70{b5d304c96e94113bdfc523ff4218a1efff4746200bdb9eeb3214a56a1302f2e4} reduction in illegal logging inside the national park compared to what would have happened in the absence of intervention,” said Jones.

Jones estimated that this decline prevented the release of a little more than half a teragram of carbon. That’s comparable to saving 1.3 million barrels of crude oil.

“It’s definitely significant, but not huge,” said Jon Wang, a post-doctoral scholar at the University of California, Irvine department of Earth system science who was not involved in the study. “To put that into context, the entire world consumes something like 97 million barrels of oil a day.”

But this estimate doesn’t take into account all sources of carbon dioxide in the forest. “A lot of carbon stocks that need to be protected are in the soil, especially in Indonesia,” said Wang. “Deforestation leads to emissions of those carbon stocks pretty rapidly.” But even their conservative estimate, the researchers write, more than offsets costs of the health care intervention.

“The program not only benefited the forest, it benefited humans,” said Webb. Between 2008 and 2018, diagnoses of malaria, tropical diseases, tuberculosis, chronic obstructive pulmonary disorder (COPD), and childhood diseases like mumps, measles, rubella and whooping cough, all declined.

“It was a creative solution to a difficult problem,” said Wang. “Protecting forest cover is often viewed as a top down problem, something governments need to create a law for.” But in reality, those measures won’t work if they don’t include the perspective of the people most affected.

“The key thing is that we ask the communities what the solutions are, and then we implement those,” said Webb. “Every time I’m in one of the communities, people will walk up to me and say, ‘Boy, when I designed the program I did a great job.’”

Wed Nov 11 , 2020
[View the latest updates to the 2020 Nobel Prize winners list.] The Nobel Prize in Physiology or Medicine was awarded jointly to Dr. Harvey J. Alter, Michael Houghton and Charles M. Rice on Monday for the discovery of the hepatitis C virus, a breakthrough the Nobel committee said had “made […] 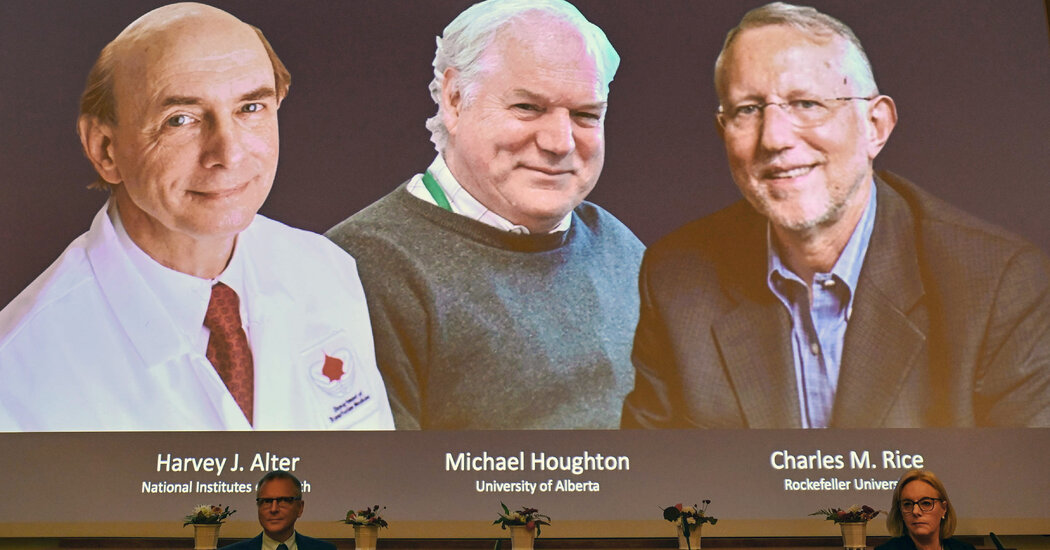