After six years of recession an upturn is fomenting in the farm economy, with higher than break-even market prices currently for several major commodities, such as corn, soybeans, wheat and dairy. The recent improvement in farm markets is occurring mostly without federal price supports, but crop insurance payments are needed to help farmers whose production was cut by severe storms and drought.

The improving farm market outlook is due to more than weather-related reduction of key commodities. Farm prices are rising for several reasons. Vaccines are becoming available to curb COVID-19, thereby allowing most people to resume their regular activities.

Another factor is that it appears the U.S. will rejoin global efforts in 2021 to work with other countries to establish open trade policies without tariffs. There are signs already that the United States will deal with China’s dominance in manufacturing and Russia’s threats to world stability in a unified approach with the other G-7 nations of Canada, France, Great Britain, Germany, Italy and Japan, rather than “going it alone” with China and acceding to Russia’s wishes.

Moreover, renewed involvement of the U.S. in world efforts to curtail carbon emissions and to figure out how to adjust to climate change will likely lead to improved working relations with similar-thinking people in foreign countries and greater acceptance of American goods in their marketplaces.

Most people everywhere, and especially those involved in agriculture, look forward happily to being able to travel with fewer restrictions in the foreseeable future if COVID infections decline. Farmers and ranchers want to resume attending trade shows, rodeos, and conferences in person rather than virtually.

Implementation of promised federal stimulus projects, such as the construction of roads and bridges and the expansion of non-polluting energy generation will create more jobs, thereby reducing unemployment and increasing the purchasing power of many families who were affected by temporary or permanent workplace shutdowns.

The expected lay-offs in the petroleum and coal industries that many workers and citizens perceive as detrimental, will not be immediate, but will be phased in gradually as these extractive resources dwindle and alternative jobs materialize over the next few decades.

The hoped-for improvements in all Americans’ livelihoods signal a new normalcy and not a return to past ways of life. The whole country is becoming more diverse and will benefit if there are accompanying reductions of inequality and systemic social disadvantages for racial and socioeconomic minorities.

Is it reasonable to also hope that the wounds of political and ideological divisions among Americans might begin to heal? That remains to be seen. Putting aside differences in favor of solving these problems together begins for everyone at the personal level.

With a new normalcy emerging, Christmas is a good time for agricultural producers and all Americans to reflect on what we have to be thankful for. The New Year is a good time to plan how we can make ourselves better persons.

Christmas has always been a time for thankfulness because of the birth of Christ. Christ’s new way of thinking and behaving 2,000 years ago attracted many followers, mainly in the Roman prefecture of Judea at first.

Judea’s Roman governor, Pontius Pilate, became so alarmed that he encouraged mob violence to suppress the Christian movement, resulting in the death of Christ, but the movement spread all the more. Many subsequent leaders in Europe and Western Asia became both frightened by — and attracted to — the ideals that Christ had preached and his followers were practicing.

The Christian movement during the early centuries of the first millennium AD incorporated ways of thinking and behaving that are relevant today. They include, but are not limited to the following:

Giving to others instead of taking from others.

Forgiving instead of seeking revenge.

Practicing nonviolence instead of terrorism.

Sharing capacities and possessions instead of dominating others and controlling their livelihoods.

Behaving honestly and with integrity instead of deceit and not following through with promises.

Implementing love rather than loathing for others.

Behaving humbly instead of arrogantly.

This is a difficult set of ideals to live up to. However, the New Year, 2021, signals the turning of a new leaf in our behaviors and aspirations. Many of us make vows to reform habits, like replacing overeating and overdrinking with controlled consumption and imbibing, and exercising instead of indolently laying around.

Individuals and families can make this holiday season meaningful by turning those parts of our thinking and behavior that are self-centered into acts of kindness. Our example may inspire others to behave similarly.

Have a blessed and thoughtful Christmas and New Year.

Sat Dec 19 , 2020
“Music as Medicine” performance, December 17, 2020 Carnegie Hall Last night, the National Virtual Medical Orchestra, composed of healthcare professionals, and accompanied by the famed violinist Joshua Bell and countertenor Anthony Roth Costanzo, took part in an online performance to honor all healthcare workers during the course of the pandemic. […] 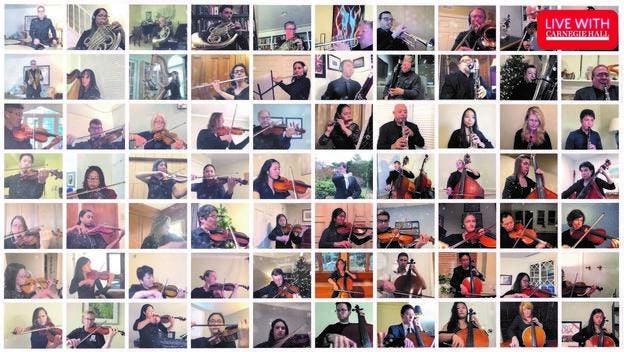