This day last year, the 50th anniversary of Earth Day, was supposed to be complete with international summits, events, and celebrations.

But most of that was scrapped thanks to the coronavirus pandemic.

Here we are on the 51st anniversary—still battling COVID-19. Since last year the world has faced an unprecedented economic crisis, racial reckoning, and political shift in the fight for climate change.

So much has happened—and to celebrate this Earth Day we wanted to highlight notable environmental and climate events, issues, and news that have shaped society and our planet over the past year. 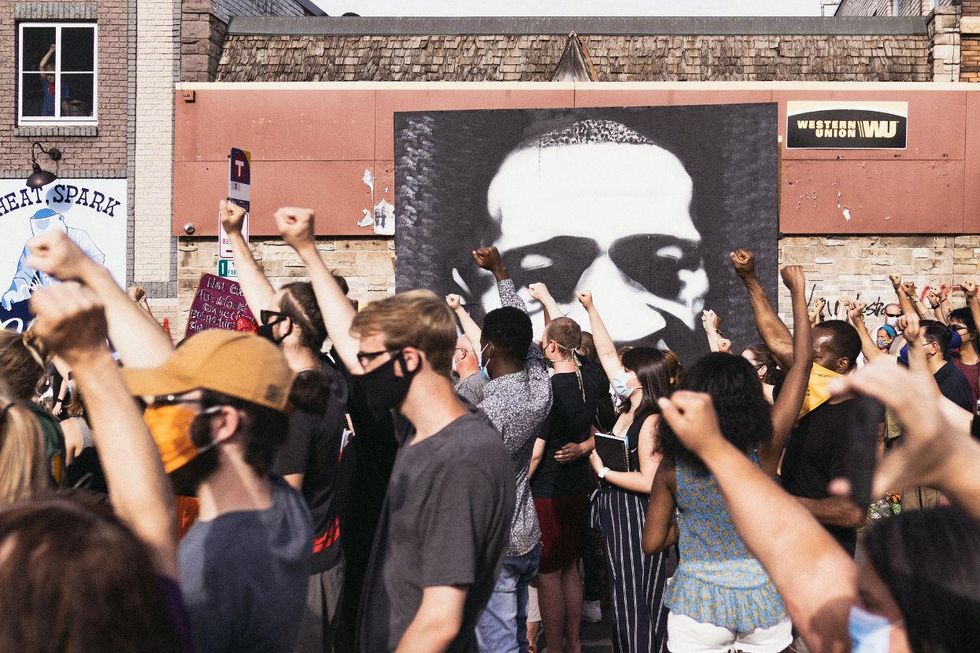 Protesters gather in Minneapolis in June 2020 after George Floyd was murdered by police. (Credit: Lorie Shaull/flickr)

Although COVID-19 lockdowns were clearing the air and driving down greenhouse gas emissions, experts were saying this was only a temporary solution to the climate crisis, especially as countries began restarting economies.

The executive director of the UN Environment Programme, Inger Andersen, said that “in COVID-19, the planet has delivered its strongest warning to date that humanity must change.”

Pangolins, the species thought to have been a possible conduit of the COVID-19 virus, were spotlighted as one of the most heavily trafficked species in the world.

And plastic pollution as a result of COVID shutdowns was increasing— a new study highlighted that hundreds of thousands of tons of plastic waste wash up on shores every year. With mask and plastic glove use on the rise, and recycling programs on the decline, a new source of plastic waste spiked.

In the U.S., the Trump administration, in advance of the upcoming November election, loosened environmental regulations under cover of pandemic turmoil. The Guardian reported that the federal government eased pollution reporting rules for industries during the pandemic as well as “eased fuel-efficiency standards for new cars; frozen rules for soot air pollution; proposed to drop review requirements for liquefied natural gas terminals; continued to lease public property to oil and gas companies; sought to speed up permitting for offshore fish farms; and advanced a proposal on mercury pollution from power plants that could make it easier for the government to conclude regulations are too costly to justify their benefits.”

One week before the start of June, 46-year-old George Floyd died in Minneapolis after a police officer pressed his knee into Floyd’s neck while he was in police custody. The world responded around this latest act of police mistreatment, resulting in weeks of protests calling for an end to the systematic mistreatment of Black and Brown individuals in the U.S. The officer who killed Floyd was just this week found guilty of murder.

The environmental movement announced solidarity with the Black Lives Matter protesters, and the environmental justice movement. Another similar movement—the intersectional environmentalist movement—announced that in order to truly address the climate crisis, the government must first acknowledge and address the disproportionate health burdens faced by certain communities.

Later in the month, Democratic leaders in Congress released a comprehensive report outlining how the federal government could address the climate crisis. The report emphasized racial justice.

Reports highlighted that Australia’s 2019 bushfires, a period also dubbed the “Black Summer,” had displaced or killed nearly three billion animals. And on the other side of the world on the U.S. West Coast, massive wildfires had turned the skies of California, Oregon, and Washington luminescent orange.

July was deemed the hottest month on record worldwide. And five of the six largest wildfires in California history took place in August 2020. At the same time, and also as a result of changing climatic and precipitation patterns, some of the largest locust swarms on record hit parts of East Africa and decimated local plant life.

On the lighter side, President Trump signed into law the Great American Outdoors Act to provide permanent funding for the Land and Water Conservation Act, which commits funding to “safeguard our natural areas, water resources and cultural heritage, and to provide recreation opportunities to all Americans.” 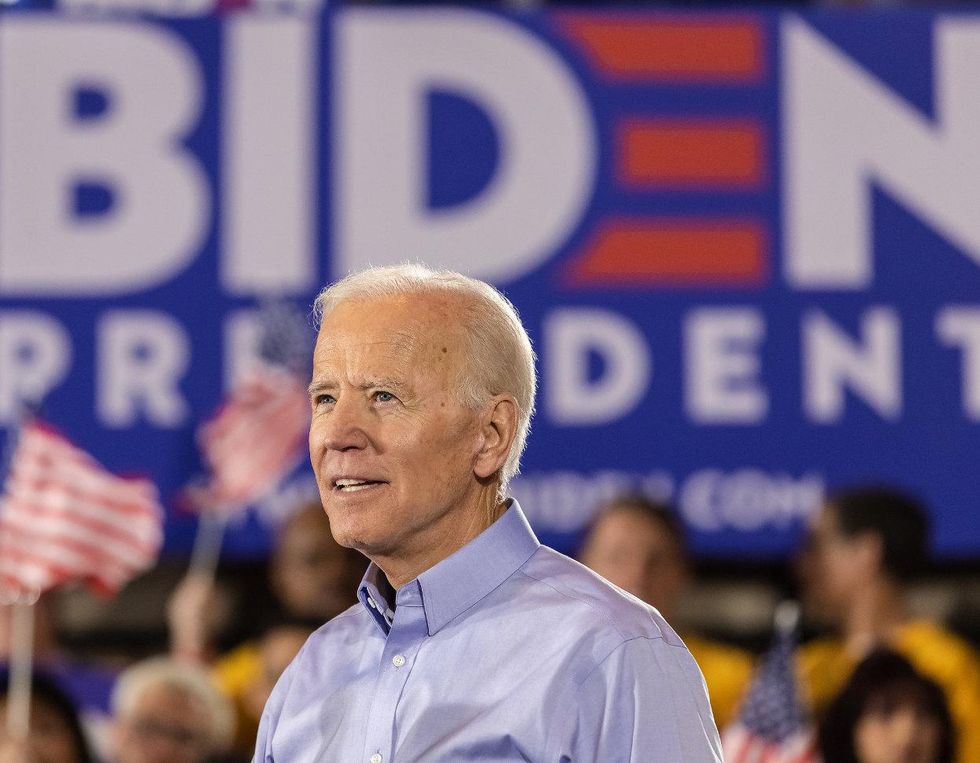 President Joe Biden at a rally in Pittsburgh during his campaign. (Credit: Paris Malone/flickr)

In September, 84 countries across the world as well as the European Union attended the United Nations Summit Biodiversity where they committed to reversing biodiversity loss by 2030. Around the same time, a global partnership of governments and corporations committed to planting more than 25 million trees as a part of Australian bushfire recovery efforts.

In October, China, one of the world’s largest emitters of greenhouse gases at approximately 28 percent of global emissions, committed to net zero carbon emissions by 2060. Two days later, Canada announced plans to ban single-use plastics by the end of 2021 as a part of a larger goal to cut the country’s plastic waste completely by 2030.

And by November, the African migratory red locust outbreak in East Africa had been brought under control after a team of experts fought the plague for several weeks, according to authorities.

The International Energy Agency, which works with governments to create sustainable energy policies, announced that solar energy had officially become cheaper than coal, stating that “solar projects now offer some of the lowest-cost electricity ever seen.”

But domestically, on November 4 after four years of waiting and one day after Election Day, the U.S. officially exited the Paris Agreement. At the time, this made the U.S. the only major polluter in the world to leave the historic pact.

And then the Saturday after Election Day, the results are called: Joe R. Biden has become President Elect with plans to set forth a rigorous climate agenda, which includes rejoining the Paris Agreement. Vox reported in November that Biden’s climate plan included a suite of decarbonization standards that would cost upwards of $2 trillion to implement. 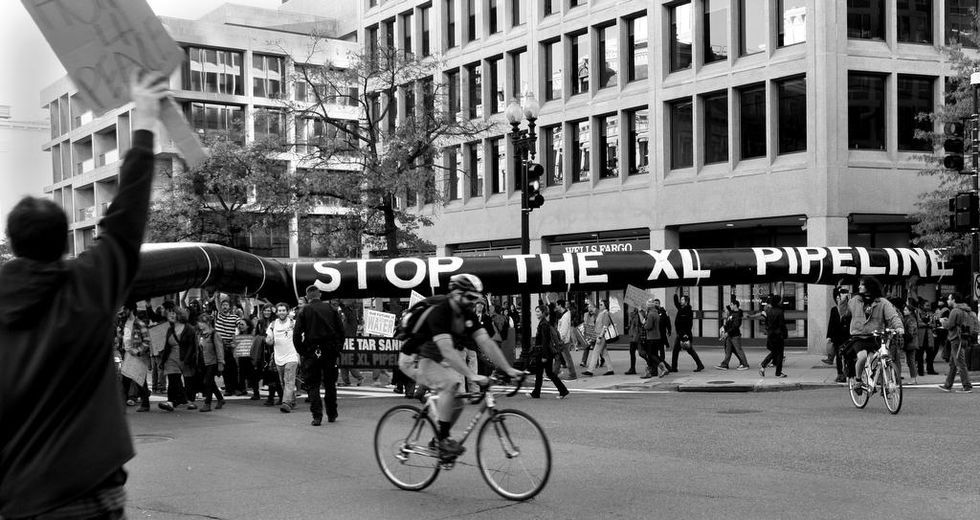 President Joe Biden, using an executive order on his first day in office, rescinded the permit for the Keystone XL pipeline. (Credit: tarsandsaction/flickr)

On the other side of the country, the largest coal-fired power plant in the western U.S., the Navajo Generating Station, or NGS, was officially demolished, marking the end of the coal industry dominance in the region. The transition was a part of a larger trend across the U.S. and worldwide to phase out coal as an energy source.

Internationally, the European Union Council announced that EU leaders agreed to cut their greenhouse emissions by 55 percent by 2030.

As many looked to the new year as an opportunity to shuck off the hardship of COVID, wildfires, and protests in 2020, January 6 brought an unprecedented riot to the steps of the Capitol Building, signalling a continued ugly partisan divide in the U.S.

But in line with the shifting administration, a federal appeals court struck down President Trump’s industry-friendly Affordable Clean Energy, or ACE, rule, finding that the rule did not provide sufficient environmental or health protections. This was not the first judicial pushback on Trump-era environmental rollbacks.

Newly inaugurated President Joe Biden, using an executive order on his first day in office, rescinded the permit for the Keystone XL pipeline, cancelling the project for good. Indigenous advocates and environmentalists had been battling the pipeline for years, pointing to a concern over potential oil spills and treaty right infringements.

February and March brought a slew of Senate confirmations, including Pete Buttigieg for Transportation Secretary, Michael Regan as administrator for the Environmental Protection Agency, and Deb Haaland as the first Indigenous Secretary of the Interior. These confirmations among others represented a unique diversity in the new Cabinet as well as emphasis on environmental justice.

February brought devastating winter storms that hit much of the South and spotlighted a need for energy and water infrastructure reform amidst the threat of climate change.

Numerous reports this year have highlighted that many countries are not on track to meeting their Paris goals. And even more recently, the Biden administration made a decision that has disappointed many environmentalists in deciding not to cancel the Dakota Access Pipeline project.

But last week, Biden announced a $2 trillion infrastructure plan that would repair more than 20,000 miles of road across the country and speed up the U.S. transition to cleaner sources of energy. This “largest American jobs investment since World War II,” would draw funds from corporate taxes and would address longstanding social and economic disparities through community investment and job opportunities.

So what’s on tap today? NASA is hosting a live virtual conversation with NASA scientists and astronauts currently in space to discuss our connection to the Earth, and Biden will host a Leaders Summit on Climate in an attempt to make up for time lost over the last four years. Other nonprofits and local groups will be hosting events of their own.

If nothing else, from Earth Day 2020 to Earth Day 2021, we’ve seen municipal and state governments, in the absence of a national plan, rally around carbon neutrality. We’ve seen the world begin to take the meaningful, incremental steps necessary in addressing biodiversity loss, rising seas, and the overarching threat of climate change. And more recently, we’ve witnessed a shift in the U.S. at the federal level in acknowledging the embedment of environmental injustice and racism within our political structures and regulatory systems.

Let’s use today, this 51st Earth Day, to look forward toward a better future for the planet.

Thu Apr 22 , 2021
Environmental lawyers have said advertising by fossil-fuel companies should either be banned or come with “tobacco-style” health warnings about the risks their products and operations pose to people’s wellbeing and the environment. In a new analysis published on Monday (19 April), the NGO ClientEarth accused some of the world’s biggest […]