A father who has endured depression on and off for much of his life is speaking out to encourage men to talk about their emotions.

Dave Noakes, 39, from Devon, saw his mental health decline when he was diagnosed with testicular cancer in 2007.

Then in his twenties, the diagnosis came just one month after his ex partner miscarried.

Now in remission, the keen cyclist keeps his mental health in check by being active for hours a day.

Read more: How to encourage someone with suicidal thoughts to reach out

Having lost four friends to suicide, Noakes wants men to know it is “not weak to let other people in”.

Noakes first had therapy when he was 19, after a six year relationship came to an end.

“That was really helpful, but I fell off a bit and went on a bit of a rampage,” he told Yahoo UK. “I’ve always suffered with depression.”

Towards the end of 2007, Noakes’ ex partner miscarried. Around a month later, he noticed a lump while showering.

“The doctor said it was just a cyst,” said Noakes.

“I was a bit nervous and asked could I get a second opinion. I had a scan two days later and was told to come in tomorrow.”

After being diagnosed with cancer, Noakes had one of his testicles removed, followed by a round of chemotherapy.

Read more: Graduate reveals how he went from ‘existing to living’

With the treatment suppressing his immune system, Noakes had to be particularly careful not to catch any infections.

“Sport keeps my brain occupied,” he said. “I was riding around 100 miles a day, four days a week.

“I had a lot to keep me busy, but it was taken away from me.

“Once you’ve had chemotherapy, you’ve got no immune system.”

While he coped with his challenging circumstances, Noakes claims he became “unbearable”.

“With depression you withdraw,” he said. “You put up boundaries as a coping mechanism to protect yourself.

“It was very hard for my partner. I was unbearable to be around. I was angry. It was very much woe is me.”

After finishing the round of chemotherapy, Noakes had regular scans for the next five years to ensure the cancer had not returned.

Now in remission and married to professional cyclist Juliette Elliott, the pair decided to start a family.

“I can’t have children; we tried to conceive and had IVF twice,” said Noakes.

Two years ago the couple adopted four-year-old Alexandra, who Noakes has spent most of his time with since being furloughed from his job at a VeloPark early in the coronavirus outbreak.

“I started a blog at the start of lockdown,” he said. “I keep my mental health in check through exercise and talking.

“[Cycling] races have been cancelled, my work is essentially cancelled.

“I ride a lot. Riding is more than just having fun; it keeps you in check.”

Like millions worldwide, the pandemic has taken its toll on aspects of Noakes’ life.

Speaking of his marriage, Noakes said: “We nearly got divorced about 16 times. It’s been tough, so we went to a counsellor.”

The father-of-one also lost a fourth close friend to suicide at the end of October.

“One [suicide] is bad but I could list off 10 people in the past 10 years within my network,” he said. “It’s just heartbreaking.”

Early in the pandemic, experts warned the outbreak could have a “profound” and “pervasive” impact on people’s mental health.

Half a million Britons took an online suicide prevention course in May.

Statistics show men are three and four times more likely to take their own life in the UK and Ireland, respectively, than women.

This Movember, Noakes is encouraging people – particularly men – to talk about their feelings.

“People feel weak and don’t want to let people in, but you don’t have to do it publicly.”

For confidential emotional support at times of distress, contact The Samaritans at any time by calling 116 123 or emailing [email protected]

Watch: Shining a light on men’s health this Movember

Sat Nov 7 , 2020
OKLAHOMA CITY (KFOR) – After a record shattering day of new COVID-19 cases in Oklahoma, health leaders say you’ll need to start quarantining if you plan to gather with your family for Thanksgiving. An Oklahoma family with a loved one in the hospital is urging people to take the warning […] 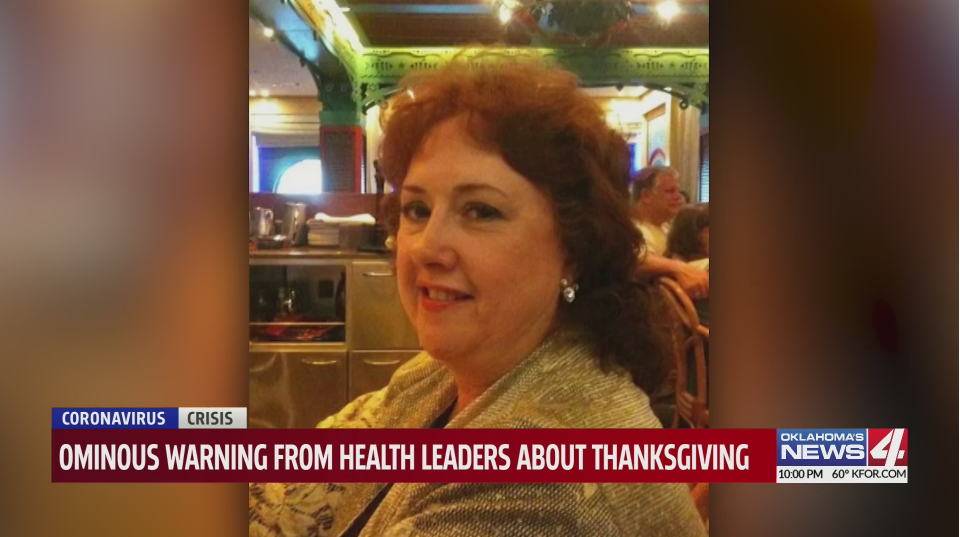