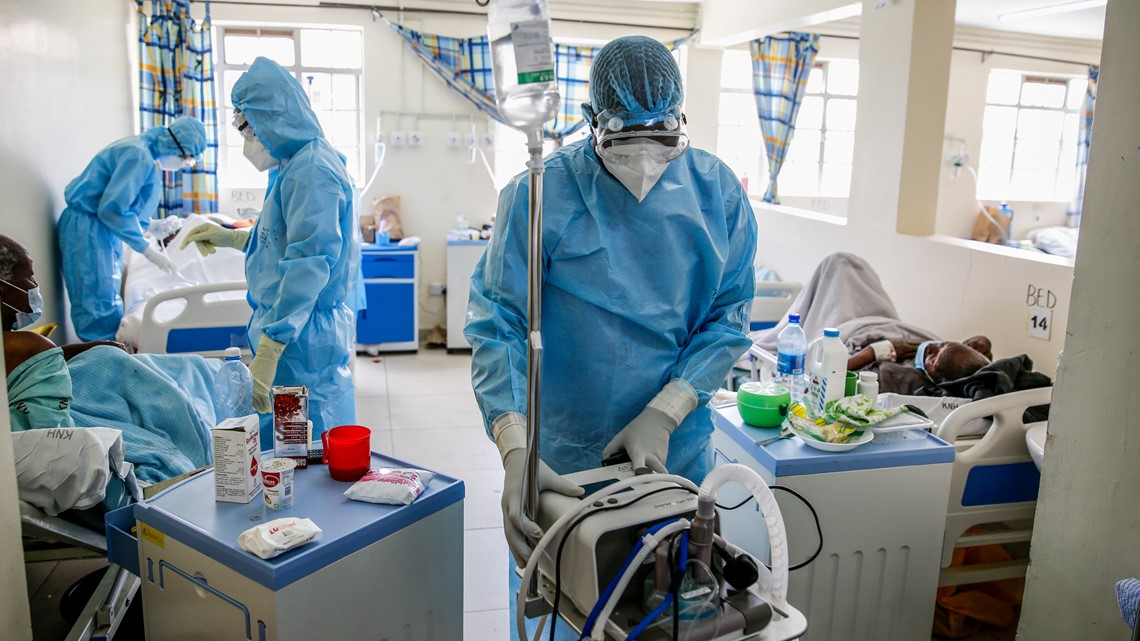 Countries fighting new surges of the coronavirus are trying to ensure they aren’t hit by an India-style disaster.

SOHAG, Egypt — Countries worldwide wrestling with new coronavirus surges are trying to ensure they aren’t hit by an India-style disaster. They face many of the same risks, including large populations that have shirked restrictions and fragile health systems shaken under the strain.

In a province along the Nile in southern Egypt, hospitals have been flooded with COVID-19 patients, a main hot spot in a third spike swelling across the country. Doctors in Sohag province warn the health system there could collapse, even as the government rushes in new supplies.

“My estimate is that there is no family in Sohag that does not have a corona case,” said Dr. Mahmoud Fahmy Mansour, head of the province’s doctors’ union. “We lost five physicians in one week.”

He said a scenario like India was a possibility, but “God willing, it is a very far possibility.”

Long reluctant to impose new lockdowns, Egypt’s government announced its strictest restrictions in months on Wednesday. It ordered cafés, restaurants, stores and malls to close at 9 p.m. and banned large gatherings for two weeks, as well as shutting down beaches and parks during the upcoming Eid el-Fitr holiday at the end of the holy month of Ramadan.

RELATED: India sets new daily record for COVID cases, but gets sign of hope from US

India and Brazil accounted for a large part of that, “but there are many other countries all over the world that face a very fragile situation,” he said. “What is happening in India and Brazil could happen elsewhere unless we all take these public health precautions.”

India has been hit by a catastrophic surge of COVID-19 infections after its prime minister boasted of vanquishing the pandemic and following multiple massive crowding events. New cases and deaths skyrocketed nearly 30-fold during March and April. The health system has been overwhelmed, leaving patients desperate for oxygen and other supplies.

Wealthier nations, as they immunize more of their populations, are finding room to open up. But countries where vaccination has been slow or minimal face grimmer prospects. They must grapple with whether to lock down to thwart new surges and risk damaging their economies — all with the possibility of an India-style tragedy looming.

In Turkey, new cases surged nearly six-fold from the beginning of March, reaching a peak of more than 60,000 a day. The government imposed a three-week national lockdown on April 29 but exempted many sectors, allowing millions to keep going to work.

Numbers have fallen, but medical experts are calling for a 28-day full closure of all non-essential services, while only some 10 million of its more than 80 million people have been fully vaccinated.

In Egypt, average daily new cases have doubled since early February to just over 1,000 a day and continue to rise, compared to earlier peaks of 1,400 to 1,600 a day last summer and in December, according to official numbers.

The scope of the pandemic has been difficult to judge in the country of 100 million, most of whom live in densely packed cities along the Nile. Official figures report 234,015 cases, including 13,714 dead — considered a significant undercount like elsewhere in the world.

In Sohag province, health workers have grown desperate. One doctor who chairs a major hospital there said the real figures are likely 10 times the Health Ministry rate of 400-450 new cases a week.

“The ministry is like an ostrich burying its head in the sand,” he said, speaking on condition of anonymity for fear of reprisals.

Mustafa Salem, a Sohag lawmaker, said he has received dozens of calls from people desperate to find ventilators or intensive care unit beds.

When Ismail Abdallah fell ill last month, his family rushed him to a clinic, where without being tested he was told it was pneumonia.

Two days later, the 50-year-old farmer and father of seven had trouble breathing. At the hospital, he was confirmed with COVID-19, and his family scrambled to find a bed in packed ICUs.

“There were no available beds in the free ward,” said a relative, Amr Mahrous. “We struggled to find a bed in the paid ward.”

After two weeks in isolation at a hospital, Abdullah died last week.

The Health Ministry has beefed up facilities in the province, sending oxygen generators and ventilators and increasing the number of ICUs. It deployed more physicians and doubled medical teams to follow up with those isolated at home. Two vaccination centers have been set up and more are planned, and 100 teams mobilized to raise awareness.

The Health Ministry listed Sohag among five hot spots in the country —- including Cairo, a metropolis of some 20 million people.

In Islamic Cairo, the capital’s historic center, families go to communal prayers during the holy month of Ramadan. Tens of thousands gather at night in the bazaar’s narrow streets, shopping or sitting in cafes. Few wear face masks.

Hajah Fatima, 57, came from the southern province of Beni Sueif with her family and had “iftar,” the meal ending the daytime fast, in a café next to the revered Al-Hussein Shrine.

“It’s a custom,” she said. “Corona? Nothing will happen to us except what God has decreed.”

So far, more than 1 million people, or just 1% of Egypt’s population, have been vaccinated, Prime Minister Mustafa Madbouly said Wednesday.

In the crowded Palestinian enclave of the Gaza Strip, home to 2 million people, cases have risen swiftly. In March and April, infection rates surpassed 1,000 a day — the number Gaza previously recorded weekly. Daily deaths have doubled to a high of 20. The virus has killed more than 900 Gazans and sickened over 102,000, more than half of them this year.

“Hospitals are struggling to cope,” the international aid group Doctors Without Borders warned this week.

The territory’s Hamas rulers closed mosques and restaurants and imposed a nighttime curfew at the beginning of Ramadan to slow the outbreak. But it decided to lift those restrictions for the final 10 days of the holy month, alarming health officials.

“We are concerned by the large-scale easing of the measures,” said Rami Abadllah, head of epidemiology at the Health Ministry.

Amid concerns over India, Kenya, which is coming down from a recent peak, halted flights with the country for two weeks, while Nigeria suspended flights with India, Brazil and Turkey, fearing new virus strains could come in as it tries to bring down cases, particularly in Lagos, home to some 20 million people.

In South Africa, with by far the largest number of COVID-19 cases and deaths in Africa, officials warn of a new surge as the Southern Hemisphere’s winter approaches.

Pakistan is in the midst of a third wave, with single-day fatalities hitting their highest of the entire pandemic on April 28, with 201 deaths.

Health officials added hundreds more hospital beds. Oxygen production had already been nearly doubled to 800 tons a day compared to last year. Still, at the surge’s peak in recent weeks, it was using 90% of that production.

New cases have eased slightly this week from a running average of around 6,000 a day.

“Thank God, we have so far managed to cope with this huge increase because of proactively building capacity of the entire system,” Planning and Development Minister Asad Umar said.

But he warned the country of more than 200 million could face an India-level disaster unless people adhere to precautions that have been widely ignored. The government has rejected calls for a lockdown but warns that could change.

“Be careful. For yourself, and your loved ones,” he said in a tweet.

Garlic: The truth about its health benefits | Aging In Style

The hobby with hidden health risks

These innovative designs are tackling taboo health issues for women